In Quiet Joy, translated from the Latin ‘In dulci jubilo’, is a traditional Christmas carol originating from the Middle Ages. Today, we know it as ‘Good Christian Men, Rejoice.’ We celebrate the holiday season with JOY as the main theme. Joining us this concert is Morris Northcutt, local trumpet soloist. He will perform three pieces on three different instruments (however, not all at the same time 🙂 ). Morris is endorsed by Bach Brass and we want to thank them for supporting our community musicians.

We are looking forward to sharing the stage with Morris and excited to bring the JOY of live music to you! 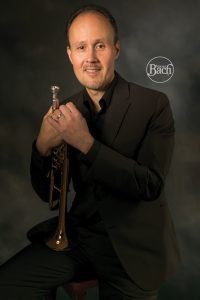 Morris Northcutt is a Bach Conn-Selmer Solo Performing Artist.  He is currently the lead trumpet player for legendary jazz saxophonist Pete Christlieb with his Tall and Small Big Band, and is principal cornetist for the internationally recognized Tacoma Concert Band, a position he has held for over 20 years.

Morris’s freelance career can be traced throughout the Puget Sound region, as well as Canada and Europe. In 2014, Morris was a guest soloist with Denis Gautier Big Band’s “Operation Dragoon Anniversary Tour” in Southern France – a stint he reprised again during the Summer 2017.  In 2018, he was a featured soloist on a tour of Ireland with the Tacoma Concert Band, and most recently (2019) completed a solo concert and recital tour throughout Ireland.  Northcutt has solo performances and masterclasses scheduled throughout 2020 with stops to France and the UK where he will be featured with many of the popular brass bands and concert bands of the region.

Morris is a local business owner and a native of Tacoma.  He is a member of the Lakewood Rotary Club, serves on several community boards and enjoys spending as much time as possible with his ten-year-old twins and his wife, Lavonne.